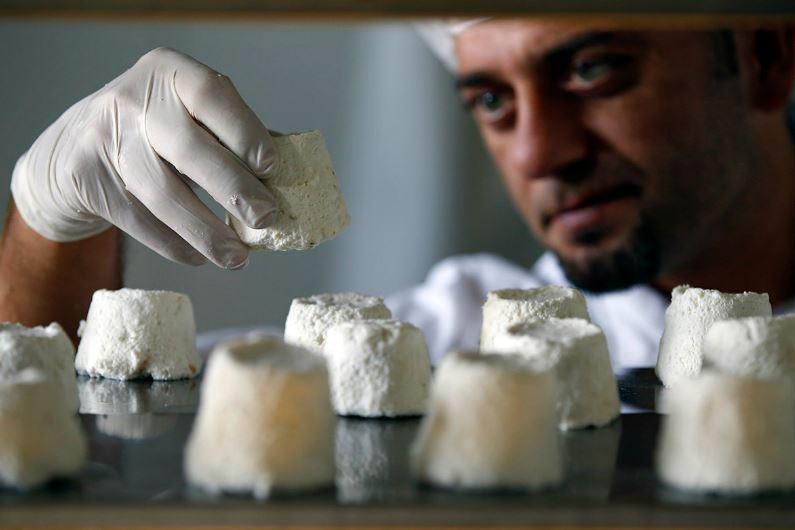 Sometimes I like to think of myself as a cheese diplomat. I try to foster friendships and mediations between all cheeses because frankly, I don’t believe there is such a thing as a bad cheese.

Therefore, it is in the above backdrop that this article tends to provide answers to the questions of “how does Pule cheese taste?” or “how good is pule cheese?”

Pule cheese is a semi-soft, white cheese from Serbia. It has a mild flavor and the taste is similar to the Spanish Manchego Cheese. Pule cheese has a characteristic scent and great taste. It’s very salty and has a super smooth texture when compared to most cheese, and the aroma is one to die for.

It’s also very soft and comes in small cubes. When you spread some on bread, add it as a topping to any meal, or simply eat it with crackers, it’s quite enjoyable.

Cheese is a food produced from the milk of animals, usually cattle. It comprises proteins and fat from milk and usually in most countries, cheese is made from the milk of cows or goats but there’s a twist when it comes to pule cheese.

Pule cheese also known as Magareci Sir is a Serbian cheese made from Balkan donkey milk and goat milk, 60%, and 40% respectively. Slobodan Simić is the world’s only producer of donkey cheese.

Magareci Sir is the world’s most expensive cheese with prices ranging from $600 to $1130 per kilogram.

Pule cheese is made from donkey milk and produced in just one place in the world, a village called Zasavica in Serbia. It comes from a farm where donkeys are milked by hand each day and where the animals are treated like royalty. The place has been around since at least the 17th century, but it only started making pule cheese about 35 years ago.

Pule is costly. Milking a donkey for making pule takes time and converting it to cheese is even more expensive. However, it takes 61⁄2 gallons of milk [25 liters] to make 1 kilogram of pule cheese, hence its rarity and expensive nature.

Pule’s rarity can be attributed to the scarcity of domesticated donkeys available for milking and the high cost of labor. Unlike cows that produce 60 liters of milk, donkeys produce 1.2 – 2 liters of milk.

However, notwithstanding the hefty price tag and rarity of pule cheese, a lot of people still prefer it to other cheeses. This is so because of its renowned flavor and rich milk.

Lovers of cheese all over the globe, especially those that are yet to have a taste of the Serbian pule cheese have frequently asked what donkey cheese tastes like. Although deducible, it is obvious that it is soft and crumbly but Pule has a very similar taste to Spanish Manchego Cheese, just saltier, with a richer and renowned flavor.

According to the lucky few who have tried it, donkey milk cheese is on one hand soft and crumbly, and slightly salty on the other hand. Regardless, donkey cheese still has a great and yummy taste.

What Are The Health Benefits Of Pule “Donkey” Cheese?

Pule cheese has several health benefits which make it superior to other types of cheese. It has 60 times as much vitamin C as the more common milk. Donkey milk also has anti-allergen properties and is just 1% fatty.

Donkey milk cheese not only has vitamin C in abundance, but it also has protein and lactose that helps the human system develop.

Pule contains a high rate of protein, calcium, and fatty acid, which are beneficial to the human system. Eating pule cheese can be likened to eating a balanced diet. Hence it is called “Pharma food” because it is medicinal and a good diet always ready for consumption.

Donkey milk has been used as a beauty treatment since ancient times and was often consumed by Cleopatra, according to legend.

In laboratory studies, research has shown that it boosts the functions of the immune system, enhances proper circulation, and reduces the symptoms of diabetes. It was discovered that pule has calcium, protein, and lactose in abundance.

While donkey cheese is certainly an acquired taste, there are some health benefits to eating it, donkey milk contains more vitamin C than cow’s milk and sheep’s milk. Donkey milk also has higher levels of fatty acids than cow’s milk – The calcium content in donkey milk is also higher than that in cow’s milk.

Calcium is a mineral that enhances healthy bones and teeth. It also plays a vital role in muscle contraction, regulating heart rhythm and so. Protein helps build body tissues, encourage metabolic reactions in the body, and enhances the development of the body.

Why You Must Have A Taste Of Donkey Cheese?

Pule is a type of cheese made from the milk of Balkan donkeys, a rare species in Serbia. Ranchers have to milk hundreds of donkeys to produce just one kilogram of this rare cheese, which makes it one of the most expensive cheeses in the world.

Donkey milk is rare because donkeys produce very little milk. Female donkeys called jennies only give around three or four liters of milk a day, while cows can produce 30 liters or more. To get a pound of donkey cheese, you need around 25 liters (6.6 gallons) of milk. That’s a lot to ask from just two jennies!

Donkey milk has been proven to contain more than 50 different protein fractions, which is probably why Cleopatra used the milk in her beauty treatments. It also contains vitamins, minerals, and essential fatty acids.

The health benefits of donkey cheese make it valuable even today. Donkey milk is very nutritious for humans and contains three times as much vitamin C as cow’s milk. It’s also rich in vitamin A and B12, proteins, omega-3 fatty acids, and minerals like iron and zinc.

The strength of donkey cheese comes from the fact that it contains very little lactose. The percentage of lactose in donkey cheese is less than one percent. The reason for this low amount is because of the composition of the milk from which the cheese is made; this means that those who are lactose intolerant can enjoy donkey cheese without side effects.

Where To Get Pule Cheese?

Pule cheese, made from donkey’s milk, is said to be the world’s most expensive cheese. It costs $550 a pound. It’s also a rare delicacy, produced exclusively in Serbia.

Unfortunately, Pule cheese cannot be bought online, except in Zasavica Special Nature Reserve and a handful of restaurants in Serbia and Montenegro. You’ll have to take a trip to Serbia, which makes it even more expensive. However, it is worthwhile, considering its uniqueness and delicacy.

Knowing the stuff white pule cheese is made of, how expensive and rare it is, and how soft and crumbly it tastes with a touch of intense saltiness. Donkey cheese is unique and genuine in its way.