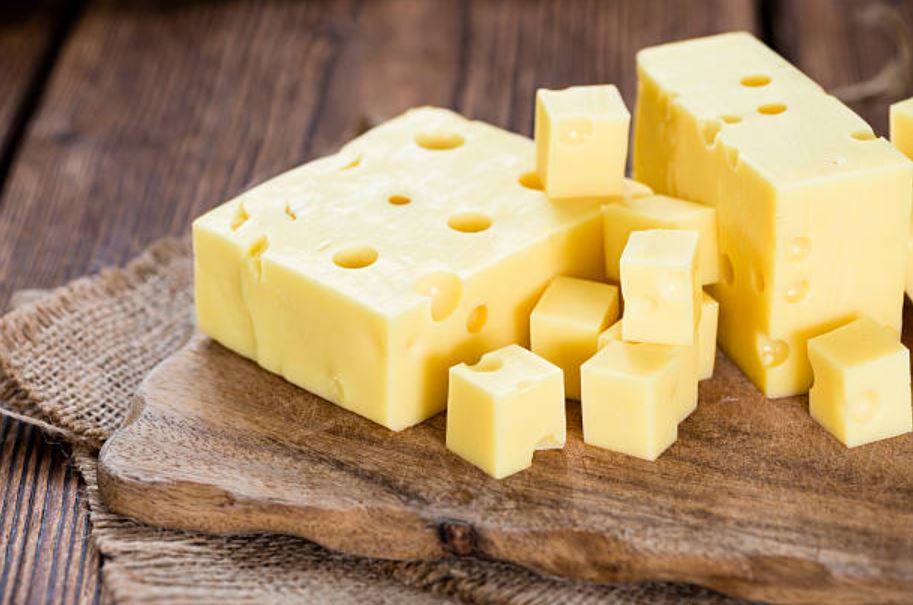 There are tens of thousands of different varieties of cheese, each with its shape, size, texture, taste, color, and nutrition. Cheese differs in terms of

the source of the milk used in its production. Cow, goat, donkey, and sheep milk are the most popular source of milk for most cheese.

To prepare cheese, one has to add bacteria to the milk to create a chemical reaction that will lead to the formation of solid and liquid (curds and whey). And the “whey” is subsequently drained off and dried into a powder. The type and variation of the bacteria added to the milk have a huge effect on the texture and taste of the finished cheese.

However, some cheese, like the swiss cheese, comes out holed after production. This is magic many people tend not to understand with cheese. Therefore, this article shall take us on an adventure to knowing why some cheeses are holey.

Why Is Swiss Cheese Holey?

Swiss cheese, one of the most popular and recognized types of cheese worldwide, is known for its holey feature. Canadians and Americans opt to use “swiss cheese” as a genetic cash-all for all swiss-style cheese with holes.

However, the proper name for swiss cheese is Emmentaler because its origin can be traced to Switzerland’s Emmental region. Emmentaler is the notorious cheese with sweet holes and a nice flavor. The question remains; what causes these holes in this lovely cheese? Is it the heat it was exposed to or what!

Like most cheese, swiss cheese is made from cow milk and contains bacteria that help convert the milk to solid. Cheese Makers believe that the other bacteria are known as Propionibacterium Freudenrichii. P. Freudenreichii is responsible for the holey feature of swiss cheese.

Since swiss cheese is made at warm temperatures exactly or above 70 degrees, the cheese becomes malleable and extremely soft. And when the other bacteria added to the cheese continue to grow, it emits carbon dioxide, which causes openings in the cheese.

Brown Swiss, Emmental, and Gruyere are just a few of many kinds of cheese with holes. Roquefort and Gorgonzola have just one big hole in the middle. This is because they’re made using different processes than other types of cheese. Cheesemakers refer to these holes as “eyes” because they resemble: eyeballs with pupils in the middle of them.

These openings are known as “eyes”. This situation can be likened to ” blowing air into a chewing gum”. When one blows air from one’s lungs into a piece of chewing gum, it forms a bubble, but the bubble will eventually pop due to pressure from the environment or your lungs.

Unlike chewing gum, when bubbles form inside a warm swiss cheese, and the cheese is cooled in a room less than 30 degrees of warmth, the holes remain. And the cheese now has its eyes. This is how the popular swiss cheese, Emmentaler comes out holey. Although it takes about 30 days at 70°F for the eyes to form, Swiss cheese is still left for about two months after being made to age properly before being sold.

The bubbles in cheese are caused by carbon dioxide and oxygen gas, which are produced by bacteria as it breaks down the lactose in milk. Since the bubbles are filled with gas, they float to the surface of the curd and create a big hole.

Tiny holes can be found in almost any kind of cheese and usually occur when the cheese is aged. The longer aged cheeses have larger holes and those that are younger have smaller holes. The size of the holes depends on how long the cheese has been aged but also on what sort of bacteria is used to make the cheese. Different bacteria produce different types of gases, which makes each type of cheese unique and gives it its flavor.

Summing up, swiss cheese with larger eyes has a better taste. It is said that the same stuff that made the eyes larger makes them taste better. Funny right? But it is the truth.

How Long Does Swiss Cheese Last?

Holey cheese, such as swiss cheese, is a semi-hard cheese and, as such, doesn’t spoil easily. Emmentaler can remain fresh for a longer time. However, it is not advisable to leave swiss cheese out for a long while.

This is because the growth of bacteria is very fast at higher temperatures. When the bacteria grows, it forms dark spots on the cheese, which damages the nutrient and freshness of the cheese.

If not left in the open at a higher temperature, swiss cheese takes longer to spoil. The harder the cheese, the longer it lasts. And since Swiss cheese is a semi-hard cheese, it lasts longer than most soft and hard cheese.

How To Preserve Swiss Cheese?

Although swiss cheese has a long shelf life, special care and precautions must be taken into consideration while trying to store swiss cheese. Otherwise, it will go sour in hours if not preserved properly.

The refrigerator is the best place for preserving cheese. The temperature is calm and cool for the nutrient and texture of the cheese. Get a piece of the cheese paper, wrap your cheese neatly and place it carefully in the freezer at not more than 5° Celcius.

If cheese paper is not available, use wax paper or parchment. There is no need to make holes in the cheese since swiss cheese has holes already. Follow these methods, and your cheese will be in good health for two to four weeks.

However, make sure the cheese is removed from the refrigerator for at least 30-40 minutes before serving t natural flavor o preserve the taste of the cheese.

Do Holes Change The Taste Of Cheese?

Holes in cheese result from chemical reactions, with no side effects on the nutrition, taste, and texture of the cheese.

Like Swiss cheese, only a very few kinds of cheese have holes. Holes in Swiss cheese are caused by the other bacteria that react with milk to create curds and whey. Emmentaler’s origin can be traced back to thousands of years ago in Switzerland.

Swiss cheese is a type of cheese that originated in the Alps in Switzerland. It is made from cow’s milk and is known for its distinctive holes. Its flavor can range from mild to nutty and sharp. Swiss cheese can be used in cooking, either grated or melted, or eaten on its own as a snack.

The holes in cheese is not a sign of mold or rot, it’s just a natural side effect of the cheese-making process.