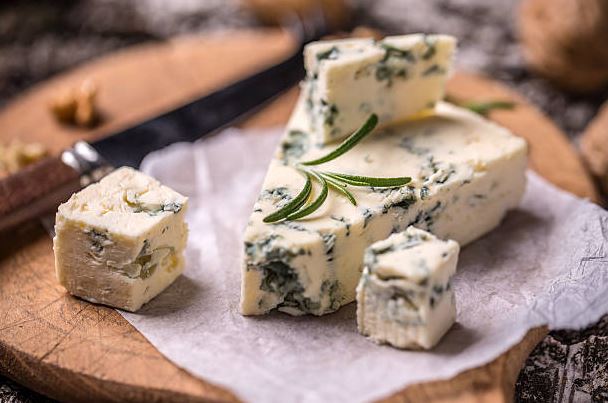 Blue cheese is a lovely type of cheese that is suitable for cooking. But many people hesitate to try it out because they’re unsure of the taste. So, when you hear of blue cheese, asides from the color, you may wonder, what does blue cheese taste like?

Describing the flavor or taste of blue cheese can be challenging because human taste buds differ. You cannot just say, “it tastes better,” and expect others to feel the same way. To some, it is salty, acidic, and bland with an offensive odor. To others, it tastes sweet and creamy.

Despite this, knowing how blue cheese tastes depends on its place of origin. Asides from the taste, you probably may also be expecting that since it is called ‘blue cheese,” the color should also be blue. But that’s not absolute because some can be green or gray. There are many amazing facts about blue cheese outlined in this article for your reading pleasure.

If you think that blue cheese has a bile taste or horrible flavor, discard such thoughts because it isn’t true. Blue cheese has different tastes and flavors depending on its type. For first-time tasters, it may be salty and acidic.

In subsequent times, you’ll begin to taste its creaminess and sweetness.

Here are some popular cheese tastes and flavors

Blue cheese is a mixture of both salty and sweet tastes. Sometimes, it tastes soft and creamy. You cannot say that blue cheese tastes good because the taste varies based on the place of its production and the number of years it has aged.

The fact is, what may appeal to some people may not appeal to others.

However, if your blue cheese tastes like mold, you should know it’s no longer healthy for consumption. But then, whether you enjoy the taste of blue cheese or not, it has quite a several benefits that you cannot ignore.

Although blue cheese has many benefits, it is not advisable to take more than 50grams per day. It isn’t also recommended for pregnant women and breastfeeding mothers. The reason is that it contains substances that can cause problems for the intestine and cause allergic reactions.

Blue cheese is a semi-soft cheese with a bit of saltiness. It is well-nourished with milk obtained from goats, cows, or sheep. The taste and flavors aren’t specific because the production does not happen in one location. Here are the types of cheese, their benefits, and their production location.

Does All Blue Cheese Taste The Same?

All blue cheeses do not taste the same. The reason is that they’re a product of different types of milk with different flavors. While some brands taste spicy and creamy, some taste salty and nutty. Regardless of the differences in taste, original blue cheese isn’t bitter or sour.

Aside from the taste, blue cheese varieties also have different flavors that depend on the production location. For instance, blue cheese made from Roquefort has a combined taste of limestone and cow milk. Others could have a spicy, complex, and offensive aroma.

What Tastes Similar To Blue Cheese?

There are varieties of blue cheese. You can substitute one for the other and it will still give you a perfect taste.