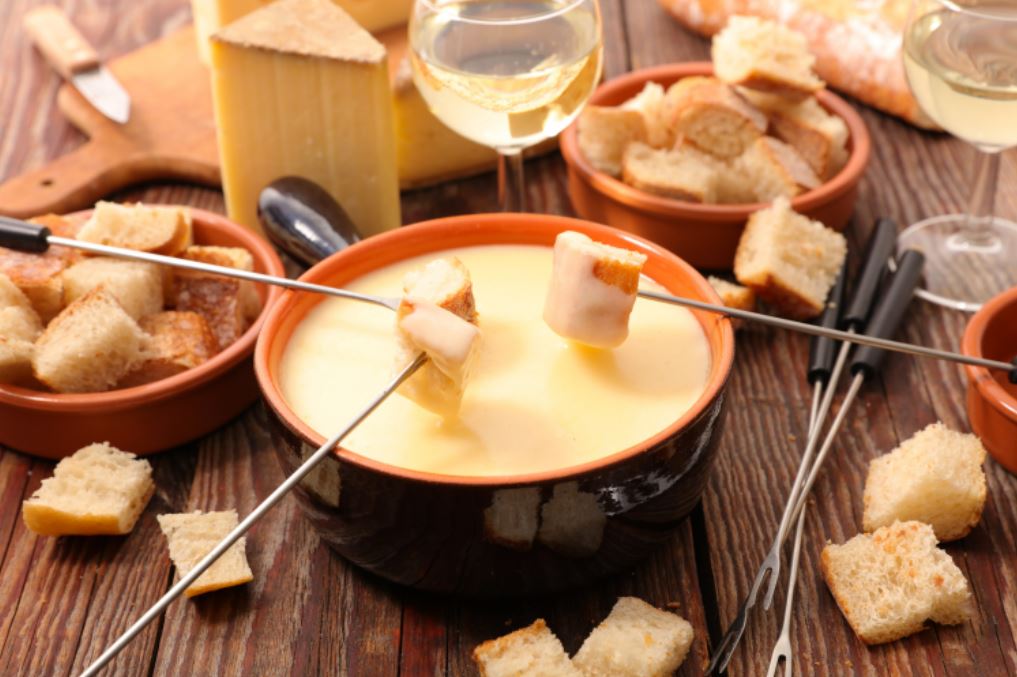 Fontina, Gruyère, and gouda are the best all-around cheeses for fondue. These cheeses melt well and have a great flavor that goes well with most fondue recipes. But what if I told you that there is another cheese that you can use to make an amazing pot of Fondue.

One of the best ways to put a smile on people’s faces is by making amazing homemade cheese fondue. Making a good cheese fondue can be tricky because you need the perfect mixture of wine, cheese, and oils. In this article, I’ll show you the overall best cheeses to make an amazing fondue.

However, you should know that choosing cheese for fondue is largely based on personal preference. It’s fun to experiment with different cheeses and find one that you like best. Generally speaking, though, the best cheeses for fondue are those that have been aged longer. The aging process removes moisture from the cheese and concentrates its flavor.

Fondue is a party dish made of melted cheese, wine, and bread. Cheese is the main ingredient in fondue. The type of cheese used can change the flavor of the dish, and it can also affect how well it melts.

There are many different types of cheeses that work for fondue, but some are better than others. For example, Gruyere cheese is a good choice because it is a Swiss cheese that has a rich flavor and melts well. Although it’s traditional to use Swiss cheeses in fondue, they are not always the best choice. Here are 10 other kinds of cheese that you can try out to make a great fondue.

Gouda is a type of cheese that can be used for a variety of different things. It can be eaten as an appetizer on its own, melted and served with bread or potatoes, or even made into bread or pasta. The cheese is also used in a variety of dishes such as fondue, grilled cheese sandwiches, and macaroni and cheese.

Gouda is the best cheese for fondue. It’s a firm, yellow cheese that originated in the Netherlands but is now also produced in other countries like Germany, Norway, and Australia.

First, Gouda is the right kind of cheese. It has just enough acidity to balance out the richness of the fondue, but it doesn’t have a strong flavor that would overpower the delicacy of the wine or broth in which you’re cooking it.

Second, Gouda melts well. This is the key to a great fondue! If you use a cheese that doesn’t melt well, you’ll get clumps of unmelted cheese floating in your broth, and nobody wants that. Because of its versatility and delicious flavor, Gouda is one of the most popular cheeses in the world and can be used to make great-tasting fondue.

Most fondue recipes call for Gruyere, but I find that Fontina gives a better flavor. Fontina cheese is a little bit nutty and a little bit sweet. It has a cold, creamy texture that works perfectly with wine. If you cook it too long, it will get stringy. If you cook it just right, it will be delicious.

Fontina is a cheese that originated in the Italian alpine valleys and is traditionally made from cow’s milk. This cheese has a high-fat content, which makes it perfect for fondue because it tends to melt smoothly when heated.

Fontina is just one of the many kinds of cheese you can use in a classic fondue. It is a cow’s milk cheese from Italy that has been aged for at least 4 months and has a slightly grainy texture and a rich, nutty flavor. Many recipes include it in the blend of cheeses because its flavor is enhanced by the addition of wine, which it can absorb without losing its structure.

If you’re a fan of French cuisine, then you’re undoubtedly a fan of Comte cheese. This versatile variety is the best choice for fondue, grated over salads and pasta, and for eating on its own with a glass of wine.

To make this delicious cheese, cheesemakers use raw cow’s milk that is heated to 90 degrees Fahrenheit (32 degrees Celsius). The resulting curd then goes into a mold where it is allowed to drain before it’s transferred to a bringing tank. Once the Comte cheese has been sufficiently brined, it’s moved into a cellar where it receives regular brushing until its rind develops the right color.

This cheese is ideal for fondue because its high-fat content makes it melt smoothly and evenly, without becoming oily or grainy. It’s also got a rich, nutty flavor that pairs perfectly with sweet apple cider and white wine.

Gruyere has a full flavor that melts well in the mouth. It can also be used in a variety of dishes, from pasta to meat and vegetables. The most important thing about gruyere is its versatility. It can be eaten alone or mixed with other cheeses to create any number of delicious dishes.

The reason that Gruyere cheese is the best cheese for fondue is that it melts just right. The consistency of the cheese when melted is smooth and creamy. This type of cheese also has a very distinct taste that makes it different from other types of cheese.

If you want to make a delicious fondue, you should use Gruyere cheese. It will make your fondue taste great!

Cheddar is an odd cheese to use for Fondue, but you can still make great-tasting cheese out of cheddar. Cheddar is a popular cheese for fondue. It is high in fat, melts easily, and has a strong flavor.

Cheddar is one of the most popular cheeses in the world. It is a hard, natural cheese that has a slightly crumbly texture if properly cured and if it is too young, the texture is smooth. It has a creamy to pale yellow color and when it becomes sharper with age, the color deepens to an orange-yellow. It is often characterized by a sharp, pungent flavor.

If you’re confused, don’t feel bad. Only one in three Americans can correctly identify Cheddar as the principal ingredient in fondue. Cheddar melts smoothly and consistently and has a pleasant, mild flavor. If you have a favorite cheddar, use it to create a pot of fondue, you’d love it.

One of the best cheeses for fondue is Emmental. An Emmentaler cheese has a distinctive taste that is hard to describe, but I think the best approximation is to say it’s a bit like a Swiss version of English Cheddar. It has the same fruity, nutty, and slightly sharp flavor that you find in Cheddar, but it’s not quite as strong or pungent.

With a great consistency once melted, it also has the perfect balance between nutty and sweet. Often described as a Swiss cheese with a pale yellow color and small holes scattered throughout, it’s ideal for fondue as well as for raclette.

The best Emmentalers are made in Switzerland using traditional methods. One of these cheeses might cost you around $20 per pound (which is fairly expensive), but it will be worth every penny. It melts wonderfully, giving a nice creamy texture with a very mild flavor that won’t overpower other ingredients in your fondue recipe.

Mozzarella cheese is the best cheese for fondue. It is a great melting cheese and has the perfect texture once melted. It also has a very mild taste so it would be best if you are serving people who don’t like very strong flavors.

Mozzarella is a mild white cheese with a soft texture and elastic consistency. It blends well and melts easily, making it an excellent choice for fondue recipes. If you want to make fondue, the best cheese for it is mozzarella. It melts well, and it gives good texture.

Mozzarella fits the bill perfectly: It melts easily and has a delicate, milky flavor. For extra flavor, you can mix in a little Gruyere or a bit of fontina. To prepare mozzarella for fondue, cut it into small cubes, then microwave it in 30-second intervals until warm to the touch but not hot or melty. Then toss it in arrowroot flour or cornstarch to coat all the pieces evenly, which will help stabilize the fondue’s texture.

Fontina is one of the best cheeses for fondue. Fontina has a nutty, buttery flavor and creates a smooth, creamy sauce. It does not separate when melted like some other cheese. It has a good melting cheese with a rich and nutty flavor. It’s often used in sauces and casseroles but doesn’t hold its shape when melted. This makes it perfect for fondue.

Both Gruyere and Emmental are good substitutes if you can’t find or afford fontina. Both of these cheeses melt evenly, though they tend to be firmer than fontina when melted. The two Swiss kinds of cheese also have a sharper flavor than fontina but pair well with the other ingredients in a fondue recipe.

It’s the perfect canvas to soak up wine and garlic flavors but still have its distinct flavor. It’s also surprisingly affordable compared to other Swiss Cheese.

I think that one of the best cheeses for fondue is Parmesan. It melts very well, it has a good flavor, and the consistency is great. Parmesan has too much flavor to be used alone in a fondue, but if you mix 1/2 pound of Parmesan for every pound of either Gruyere or Emmentaler, the result is delicious.

Parmesan is a hard cheese which makes it easier to grate. This will allow your guests to enjoy their fondue more quicker. It has a uniquely sharp and nutty flavor, which makes it perfect for fondue and the distinct taste of Parmesan will enhance the flavor of the other ingredients in the pot.

Parmesan goes well with wine, another important component of fondue. If you eat Parmesan with wine, then you will enjoy it, even more, when you dip bread into melted Parmesan cheese.

Tête de Moine has a strong, rich flavor that stands up well to the garlic and wine in fondue recipes. It melts easily, but isn’t mushy and doesn’t separate after melting like some other cheeses. Its texture is chewy than stringy.

Due to its soft texture, the cheese has been described as an excellent choice for melting. It can be used in fondues when mixed with Vacherin Fribourgeois, Appenzeller or Gruyère, some wine, and garlic.

In conclusion, you can use your favorite cheese for fondue. This may seem like a no-brainer to some of you but if you’re looking to get the most out of your cheese, then you must consider what type of cheese is best suited for the dish.